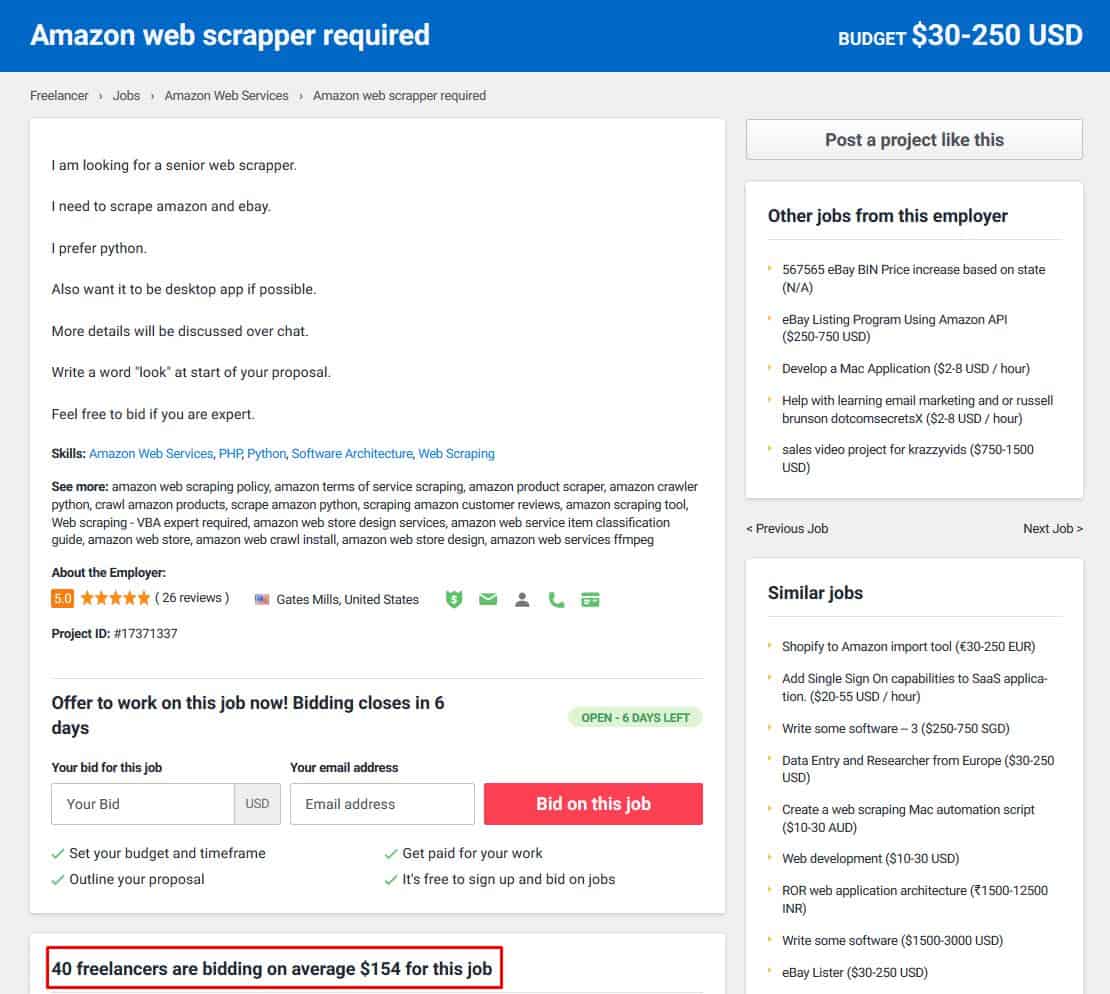 Amazon web scraping with python is a very popular solution for those of you who needs fast solution and it's affordable. But is it really that cheap? See the following screenshot so you can see how much you need to spend for a one-time solution based on hiring a freelancer.

As you know, it's expensive. Although python script is free, but the code is somewhat expensive. There were 40 freelancers apply for this job for an average $154! You will need to contact those freelancers, then spend more if Amazon changes their layouts and testing around their site. Maintaining the code is expensive and time consuming, especially for non-programmers who don't know how to code in python.

For a quick search on google, you would see a bunch of employers hiring freelancers for different job specifications and budgets. Different than hiring freelancers for amazon price scraper based on php scripts, it depends on the budget, this would come around more than $100. Less than that you will only get a data input jobs, not a product (which is python script).

The problem with Amazon scraping with python script

Two big problems are maintaining the script, then spend some more fortune on dedicated server which you need to host the script. $154 would boost up to more than $300+ for the domain and the server not to mention buying proxies and captcha breakers. And you need to spend hefty number each month. Another issue might happens, your server would got hacked. You will then need more money to spend on cleaning the site, then contacting the freelancer with some more budget to plug up the security hole in their script. Not to mention when Amazon changes, which is frequently. We recorded it happens daily across different countries and categories.

The obvious comparison between the two Amazon web scraping tool would be the physical form. ZonASINHunter is a windows desktop form, whereas python is a script which needs hosting or server to run. ZonASINHunter doesn't need any server to run, and it runs on Windows. This makes ZonASINHunter a perfect companion for non-programmers who need some fix solution which is cheap and reliable. No need to spend hundreds of dollars for a python script if you can have less hassle-free. Moreover, we have developed the software for over 6 years, so we are confident that it delivers what our customers need.

However, Amazon web scraping with python scripts would remains popular as the reproduction of data is somehow beneficial for businesses. But for non-programmers, ZonASINHunter would be more than enough to cater the need.